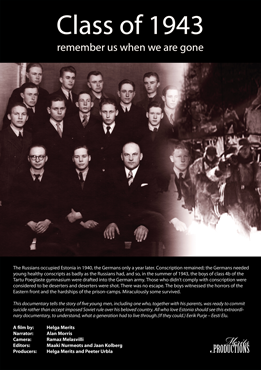 “The film is about the fate of five boys who turned 18 in 1943. Leaving school they all had to go either to the Reichsarbeitsdienst or the army. This would only be for a short period of time, but it turned out otherwise.
Wartime and postwar years in Estonia and the postwar years in Germany (period: 1940-55).”

The film is based on archive footage and pictures and tells the tragic story of a generation of Estonian boys who left their youth in WW II.